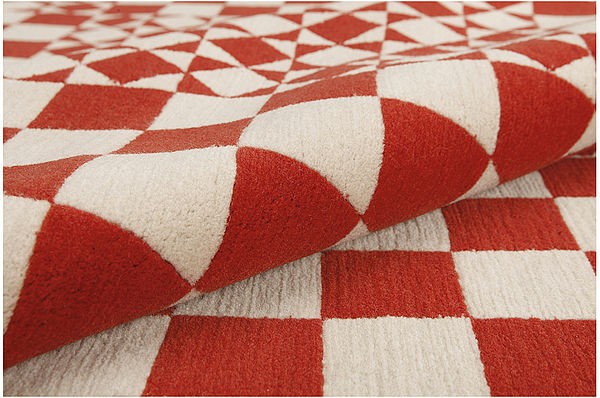 This year DESIGNERCARPETS by Teppich Drechsle presents for the first time two new carpet-models of Verner Panton at the IMM in Cologne. Their designs are based on Panton’s creation period in the 1960s. Both models are hand-knotted out of the best New Zealand wool in Nepal. They are offered in two colour settings.

In 1999, Marianne Panton, the Danish designer’s widow and Stefan Drechsle, the CEO of DESIGNERCARPETS, decided to revive Panton’s carpet designs. After a series of new editions during the last 17 years, Drechsle is now dedicated to the new edition of Astoria and Gate carpets.

In 1960, Panton created the Astoria Design. DESIGNERCARPETS offers the products in two colour combinations: the VP Astoria Coral, a warm coral red on discreet ivory coloured ground, the VP Astoria Greige in grey broken beige, as well on ivory. The patterns of both carpets are identical in their colour changing chequered squares. In reality, the pattern is smooth. The clou is the small squares being put on the corner filling exactly 7 x 7 fields and then the next but one 7 x 7 fields with the counter colour. This soothing checkboard with its uniformly horizontally and vertically going rows generates big squares. A simple graphical knack big optical scope demonstrates Panton’s pronounced skilfulness of art and his passion for shapes and colours.

The VP Gate designs date back to 1966. They consist of squares, triangles and circles in black, beige, red and petrol. Each colour is contrasted with a lighter shade of its own and the black with the beige. The straight edges of the polygons deceive the eye and simulate lines where there are no lines at all. That is why this carpet also looks like being divided by large squares. Even the dots seem to float in squares. An equally simple but ingenious graphic trick of the great designer’s trickery. The difference between the VP Gate 1 and the VP Gate 2 lies in the redistribution of light and dark colour as well as in their various arrangement of the shapes. It is amazing how similar and nevertheless completely different both carpets can look like due to this technique.

More about the Panton collection